4 Military men killed a young guy in Owerri,Emptied his Account balance and stole his Iphone

4 Military men killed a young guy in Owerri,Emptied his Account balance and stole his Iphone

A young guy named Leo Micah aged 21, was kidnapped around willow wood hotel in Owerri, Imo State since last week by men in uniform from the Nigeria Army they carried him along with his car to Anambra state collected all the money in his account killed and murder him and sold his car ES350 car.

He checked in into Willow wood Hotel last week Sunday been the 3rd Day of May, 2020. On the fateful Day being Monday the 4th Day of May, 2020, he was checking out from the Hotel inside his car with some of his friends when they were Stopped by four men wearing Military wears of the “Nigerian Army” whom as now have been confirmed that two were dismissed, one was dismissed 2018 and two are still active members drove off with Young Leo with a Clean Heart, Young Leo with a Clean heart thought these Military men were taking him to the Military Base in Imo State at Obinze for questioning but to his Greatest shock and surprise he has Driven down to a bush in Anambra State where he was killed. He had his hands cuffed behind him and he was wearing only a pair of jeans. His body was decaying already. Also a heavy stone, which one of the suspects confessed was the object used in killing him, was found near his body.
He was drained of his account balance, his sister’s account balance he uses for transaction too, collected his iPhone XS Max, took his valuables and physical cash he had on him, collected his Apple Watch and drove off to sell his car.
The young boy had lost his mother earlier this year and still missed his mother burial that took place last week Friday. His Mother died after a long sickness and was to be buried that same week he was kidnapped last week Friday been the 8th of May.
SARS was alerted and through his Apple watch one of the Soldiers collected from him, he was tracked with the Apple watch.
It was said by one of the Soldiers that his friend paid for his death probably because of money issues or jealousy and envy.
Youths has embarked on a peaceful protest against illegal detaining of youths in the country. 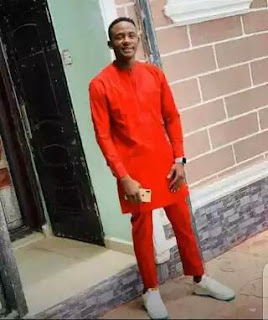 You can like,post and comment
Related:  Rape in Relationship : is it allowed?