A post-mortem examination of the helicopter crash that killed basketball star Kobe Bryant has ruled blunt force trauma as the cause of death for all nine victims. 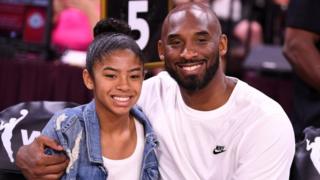 The cause of the 26 January crash, which occurred in California amid heavy fog, is still being investigated.


“On Jan. 28, the cause of death for all nine victims was ruled as blunt trauma,” the examination said. “The manner of death was certified as an accident”.

The results of the post-mortem examination were posted on the website of the Los Angeles County Medical Examiner-Coroner office on Friday.

Earlier on,Lawyers for his widow, Vanessa Bryant, have filed a lawsuit against the company that operated the helicopter.
It alleges that Zobayan – who died in the crash – did not assess weather data before taking off.

There is an incidence that cause even enemies to come together for a uniform course, it is an event which if care is not taken makes adult men to cry if not favourable, they gather to watch it, and it is the Football known as soccer!

As exciting this sport is to men, their wives don’t seem to understand what the fuss is all about however one of the ways to connect with a lover of football is to learn what it entails.

I’d quite be annoyed if you start to ask questions just when the game is on, push out your questions and research more before the incoming one.

In this article, we will look into why men love sports football especially, the rulings and positions available. Our focus will be on wives trying to understand their husbands who love football as I’ve learnt over time that we’ve got women who love football and a fan that they understand every bit of the game.

To understand better, make sure you read this article more than once.

Here are some of the reasons men love football

2. Furthermore, it brings men together Have you even wonder why game house get filled up on weekends? This is because men love being together, it is something of joy to have a common ground, laugh and offer advice without being judged which is why football stadium is bigger compared to basketball arena or stadium.

3. Sense of purpose Although It is easier been the spectator than the player, however you’ve got a team you are rooting for, moreso men can start to visualize their heroes as the one with most goals is seen as one.

Now let’s examine the position we’ve got in football with regard to standard set up.

Offense: There about 5 big players on the offence line to ward off defence before they get rid of the football, they also make a clear road for runners

Quarterback: This is the main player of focus who either throws the ball or hands it over to another. He determines the game as he is the leader of offence.

Receivers : They are two players who run in various ways to catch a ball and throw it

Running backs: There are three ways this can be done and these include:

1. Throw the ball down the field.

2. Run down the field and catch the ball like a receiver would have done.

3. Blocking the defence line like the offensive line does.

Defense: Defensive line- the defense just like the offence line also got five players at their end, their job is to knock off the ball and tackle the quarterback.

Also, they try to stop those at the back from advancing.

Defensive Ends :the defensive ends are generally four, The function of these players is to defend against the receivers and try to prevent them from catching the ball.

However, if the receiver eventually get the ball, the defensive ends prevent him from further advancing.

At the back of the defense are two defensive ends who prevent long throws from quarterbacks.

If the ball is thrown far towards the field, the defensive ends at the back keep the advancing player from reaching the end-zone

Linebacker: This player is a mobile one, He is just behind the Defensive line, but moves around to helping fellow teammates who are trying their best to defend their opponents.

End zone:  Before we see scoring is all about, we need to discuss an important area in the field known as end zone, The end zone is the area on the field which is 10 yards at both side, this is the area a goal can score on the field.

End zone is easy to describe however it is difficult to score at this side on the field obviously the team who won have the highest score, although this is not true for golf.

Touchdown: This is when the offense gets the ball into the end zone with the team scoring 6 points and only one chance for extra goal which can either be to lick the ball for one more point or put the ball two-yard line to the end zone for 2 more points.

1. The offense get the chance to throw the ball 4 times,after the third trials you either try the fourth time or you punt (give the ball to the team )

3. A standard football game has 4 quarters and each are 15 minutes.

4. The offense can only advance the ball by throwing or running it, it is not allowed to drop the ball and kick forward afterward.

5. The offense can stop the ball in any way so far it doesn’t harm other players, also you can’t stop the leader of the offense ;quarterback if there’s no ball with him

These article might seem a lot to comprehend, hence you might need to read it more than once. Hence, the best way to understand football is to watch with your husband, try to ask questions during commercials and not during the match.

In conclusion be happy and excited with him as he loves what he’s watching ;Football just like you have your hobbies too

No part of this article may be edited, copied without the permission of the author