Ebola Outbreak is back in Congo -UNICEF confirms

Ebola Outbreak is back in Congo -UNICEF confirms 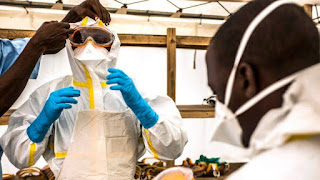 Five people, including a 15-year-old girl, have died of Ebola in a fresh outbreak of the virus in the Democratic Republic of Congo, the United Nations Children’s Fund said Monday. Nine cases total have been reported, UNICEF said.
You can also check what Bill gate said regarding how Ebola was managed last few years ,he clearly said we aren’t ready among other things
What keeps us from eradicating this deadly, contagious disease?

“Four additional people who contracted the virus — all contacts of the deceased and including the child of one of the fatal cases — are being treated in an isolation unit at the Wangata Hospital in Mbandaka,” UNICEF said in a statement.

The deaths occurred between the 18th and 30th of May but they were confirmed as Ebola-related 2 days ago.
World Health Organization Director-General Tedros Adhanom Ghebreyesus announced that six cases are found in Mbandaka via tweeter on Monday. Ebola is the country’s 11th outbreak with fatality rate of 29 to 90%.

Earlier on,Republic of Congo had tried to isolate the strand of the Virus for 42 days to be sure of the outbreak as its incubation period of 21 days.The country is also known to have the highest cases of Measles in the World.