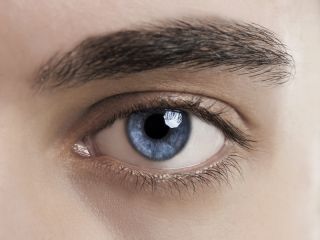 Almost every living thing has eyes, it is the most intricate part and the fastest muscle of mammals. Interestingly, the eye doesn’t grow. The eyes are the organ of the visual system.

They help to provide vision and interpret visual details. Our eyes work with our brain to tell us the shape, colour, texture and size of an object. Individuals without vision are handicapped and depends on external aid for movement.

The eye also known as eyeball is fitted into the eye socket (also called the orbit) which is surrounded by bones and connects to the brain. Surrounding the eye is the eyebrow which is above the eye and the eyelids where the eyelashes extend.

The eyebrow shields the eye from sun, prevents sweat, water and other debris from falling down into the eye socket that’s why no amount of sweat found on the face can cross the eyebrow. But they are also use for communication and facial expression(non-verbal expression).

The eyelids and eyelashes prevent dirt, sharp object and dust. This explains the reason you unconsciously blink when an object is approaching the eye.

The cornea is the transparent structure outside the eye which connects to the sclera at the corneo-scleral junction. It serves as the front window of the eye which focuses light into the eye.

The iris is the coloured part of the eye that controls the amount of light that enters the eye. The colours differ: the most common is brown.

The pupil is an aperture located in the iris that determines the amount of light that goes to the lens.

The lens is another transparent structure of the eye but found inside unlike the cornea which is found outside, it focuses light rays to the retina.

The retina is the innermost layer of the eye which lines the back of the eye, receives light refracted from other transparent structures, create signals that travels to the optic nerve.

The macula is a small yellow spot in the retina that contains light sensitive cells and allows for vision of fine details clearly.

The optic nerve is the nerve that connects the eye to the brain, it also carry impulses formed by the retina to the visual cortex of the brain. It is said that we see with the brain because our eyes see things upside down but the brain inverts the image the right way.

Screen is a flat area in an electronic device such as a smartphone, computer or television on which images and data are displayed. Today, most of our activities demand the use of screen. At the office, we fix our gaze at the screen of the projector, television, computer or smartphone.

In the hospital, the scanning machines has screen we look to, you see we spend long hours on digital screen. Most of us spend majority of our waking hours staring at the digital screen. One similarity of this digital screen is the emission of light.

Light is made up of electromagnetic particles which travel in waves, and these waves emits energy, and range in length whereby the longer the wavelength, the lower the energy.

Light is divided into visible and non-visible light; the visible light is that which human eye is sensitive to and its colours are red, orange, yellow, green, blue, indigo and violet (ROYGBIV). While the non-visible are the gamma rays, x-rays, ultraviolet (UV) rays, infrared light and radio waves.

Effect of  light  on the eye

1. Reduction in melatonin, the hormone responsible for sleep.

4. Macula degeneration – I explained above what macula is, a small spot where fine detail is clearly seen. These results from the death of cells in the center of the retina, which leads to Age-related Macula Degeneration (AMD) and ultimately vision loss.

Preventive Measures against light from screen

With the lack of frequent blinking, your eye becomes dry which leads to inflammation and poor vision. This practice is especially useful for those who work with anything that requires a lot of attention such as reading and frequent use of the screen.

In this present times, it may be difficult to keep oneself from digital screen as most are required for entertainment, education and our daily work but adhering to the preventive measures can limit its exposure.