Examining the front of the Eye using Torchlight (photos)

The Eye is the visual sense organ use for seeing,it is located in front of the head in a compartment known as orbit otherwise known as socket in layman term.

For  proper formation of images. The eye should be in normal form and shape, This  means the eye should be  devoid of refractive error and this is when the V.A has 20/20 vision.

There are three layers of the eye and they include:
1. The outer layer comprising of the cornea and sclera 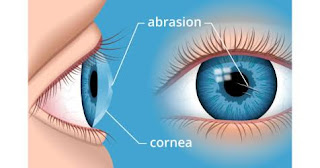 3. Lastly the inner layer consist of the retina ;This is the part of the eye located at the back of the eye. Found in this region is the macula lutea also known as yellow spot in which there’s a central depression which allow objects to be seen in details, this depression is known as Fovea Centralis

It is Worthy to note that a normal eye will Constrict when light is shunned in it while it will relax when in darkness or low light intensity,the two process are known as miosis and Mydriasis respectively

Instruments used in checking the Eye
several instruments are used to check the eye by professionals such as the optometrist ,Ophthalmologist etc and they include Arc light,Ophthalmoscope,retinoscope,Anterior segment loupe and Otoscope amongst others

However without the professional instruments listed above,a layman can also check his eyes with the use of normal Torchlight ,This can detect anomaly in the eye as ordinary as it is

The cornea is  the window of the eye,it is the part of the eye that is transparent
Normal cornea is avascular and transparent,A white and grey colour in the cornea which is not  painful indicates cornea scar

The Conjunctiva:This is tissue that protect the cornea from injury and abrasion.it is made up of the bulbar and palberal conjunctiva

Normal conjunctiva is filled with blood which is indicated by blood vessels and transparent (clear). When there is formation of a thick tissue on the conjunctiva, this Indicates pterygium

The Eyelid is the external part of the eye that protect it from sunlight,microbes and foreign objects.

While when there is a painless  cyst formation on the Eyelid,it indicates Chalazion

Also when there is Inflammation of the Eyelid ,this indicates Blepharitis

Hence you can check the front of the eyes, otherwise known as the outer layers such as cornea sclera,Eye lid etc. by taking note of their physiologic function while at the same time taking note of pathology (disease/infection) of each structure.